To preserve and protect Nelson Lake ....

Home, a weekend retreat, a place of business, a summer home or vacation destination

Our committees can always use a new member to bring fresh new ideas and energy.

History of Nelson Lake By the Late Eldon Marple

Lake Nelson…
In The Footprint of the Great Blue Ox

The area traversed by the Totogatic River has always bourne the reputation of being a true wilderness; remote, unsettled and teeming with denizens of the forest of unique characteristics-the fiercest cats, the fattest bear and the “Tobatic” buck-the one to surpass them all!

These fabulous tales were accepted even for the big loop of the river, shaped like the footprint of Paul Bunyan’s ox, which comes nearest to Hayward at a point only a few miles to the north of town where its waters reach within a mile of the Namekagon River at Phipps-kept apart from it by a quirk of the glacier-the inverted horseshoe valley that is now occupied by Lake Nelson.

The virgin pine forests were sparse along the upper Totogatic so it was almost ignored during the famous logging days and the soils were so poor that the land agents were not able to lure farmers into buying the waste cut-over lands of the timber barons. Consequently records of the activity of either loggers or settlers are also scarce; building a story from them was difficult.

The government land survey in the fifties mentioned only one detail of human usage in the township, that of an Indian trail which crossed what is now Big Island in Lake Nelson. The next visitor of record was Albert C. Stuntz, the “landlooker,” who came up from the Namekagon April 8,1867, according to his diary, and stopped for lunch at the “Narrows”-probably the site of the present dam forming Lake Nelson. He then went down the river to a dam and an old camp, probably at the lower end of the bird sanctuary.

The first record I have found of the logging of the “Big Bend” country is October 16,1886, when D. E. Tewksbury put in a camp on the river, contracting for Hersey and Bean who owned most of the timberland here. Their dam “eight miles northeast of Hayward” went out in 1891, putting it about a mile above the head of Lake Nelson, where the remains of an old logging dam can still be found.

John Moore appears to have been the first settler in the valley around the big bend. He took out a homestead claim on May 19, 1891, at the section corner beside the river near the east end of the big island where the roads from the south and the east meet under the water of the lake. Another on the southwest side of the island was entered in 1903 by John B. Goulette. At the west end of the lake a claim was filed by George H. Case on October 1,1903, on the forty west of the present dam. It was bought by Nels Krogh in 1909 and there was a road to this place before 1897 along the route of Highway 27. A road from Hayward, passing east of the hospital and Smith Lake and ending on the river at the base of the peninsula was also shown on the 1897 map. No road was shown to Moore’s place until 1902 and it came in from the east.

Fred Etlinger took out a claim in what was the depths of the “Tobatic” in 1908. a half-mile above today’s road on the north side of the lake. His access was to the east and he crossed the river at “Etlinger’s Landing,” the present park on the east side ofthe lake. The creek now called Tagalder was then called Ethnger Creek. His holdings were sold out by sheriffs sale at the order of his wife in 1913-apparently she did not like the Tobatic!

However, another woman, Emma M. Madden, filed a claim farther back in 1904. It was at the site of the old dam mentioned above and a trail was shown on one map down the west side of the river and across the island to the Moore place. This about completed the settlement of the valley in the early days, though back over the divide there were others around the Yankee school east of Milny Lake and at the Smith Lake school.

Another event which opened up the valley was the building of the Hayward and Northwestern railroad up Bradley Brook by the Hayward Hardwood Lumber Company in 1900 to their mill at the upper end of Smith Lake which was to tap the virgin hardwood and hemlock stands on the ridges to the north. It was later extended and crossed the present lakebed east of the dam and far into the depths of the Tobatic. It was in use by the Hines Lumber Company until they sold out in 1911. After this the valley reverted to a virtual wilderness for twenty years, its solitude disturbed occasionally by hunters and in the summer by nearby farmers harvesting “bluejoint” and “scratch-gut” hay in the marshes in the bottom lands.

The period of the twenties brought a new consciousness to the people of the North Country of the excesses of the logging and settlement times, and a new concern for their forest environment developed. Led by conservationists, professional and volunteer alike, a movement to save what was left now became active. Fires were curbed, conservation clubs were formed, and citizens took part in making plans to repair some of the damage done by our reckless occupation of the land. The great depression proved a boon to this program. Work had to be found for the unemployed and conservation offered plenty of it.

On January 9, 1934, a resolution was brought before the County Board by Frank O. Nelson, a member and an untiring worker for conservation, to “build a dam across the Totogatic River to create a large flowage or lake from the backwater, suitable for fish and which would furnish a refuge and breeding grounds for all kinds of wildlife.” This was to be done with Civil Works Administration funds but this program ended in confusion. The Works Progress Administration followed and made a survey for this project. By October, 1935, forty men from the Federal Transient Camp at Hayward were working at the dam with Jim Hamblin as the construction foreman.

There was often opposition to the conservation projects that Mr. Nelson, then chairman of the County Board, and the Planning Committee which he appointed, proposed. A report in the newspaper stated that the project, “will make one of the finest lakes in the county. It is rumored a few resort owners are opposed to the creating of the lake, believing it will be a choice resort territory. It may be true that someone may establish a resort somewhere on its shores, but the intent of the Conservation Committee for the flowage is to make it a nursing pond for pike.” In that they succeeded!

Unfortunately Mr. Nelson died on November 15, 1935, before he could see the dam completed. After his death the County Board passed a resolution naming the flowage being formed at the big bend of the Totogatic, “Lake Nelson,” in his memory, stating that: “this project was primarily proposed and started through the untiring efforts of the late F. O. Nelson.”

By the Late Eldon Marple 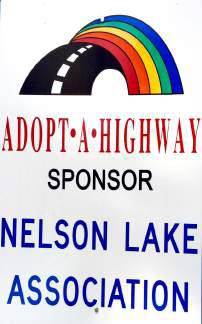